Redundancy can be as simple or as complex as you require. Stream redundancy is different depending on the type of stream setup in question. In this article, we look at the redundancy options available with a Premium type stream.

With Premium streams, there are 4 layers of redundancy:

Redundancy in the Contribution Layer means sending the input to two different mounts, referred to as Mount A for primary and Mount B for backup mounts. 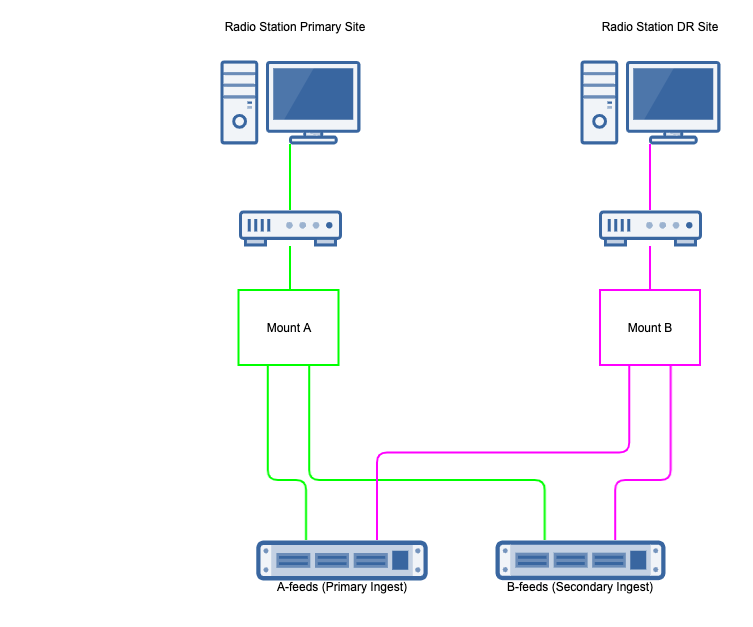 Redundancy in the Contribution Layer provides stability in scenarios where:

The Configuration Layer dictates the failover behaviour when contribution to the primary mount (Mount A) is compromised and is replicated on both the Primary and Secondary Ingests. 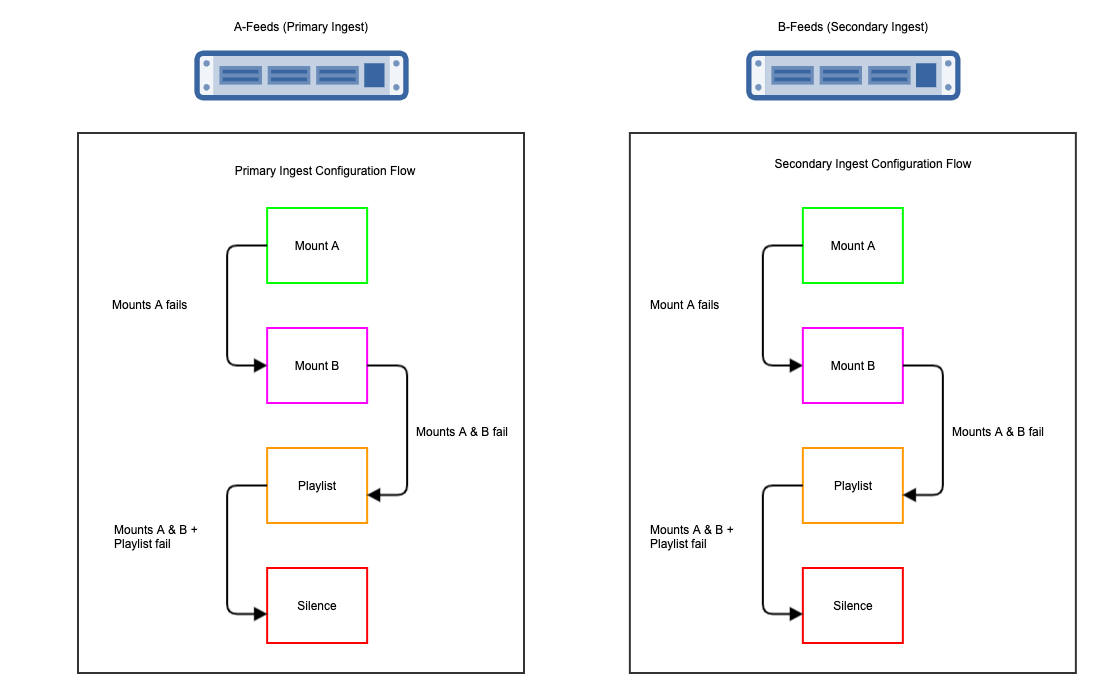 The Configuration Layer will be triggered in scenarios where:

Should any of the layers be missing or silent, it will move to the next.

Redundancy in the Ingest Server Layer combats outages that occur with our upstream providers, be that network, datacentre, general internet, or otherwise, and it also combats hardware failure that can happen unexpectedly. The Ingests are located in different sites and are served by different transit providers, and contain identical configurations for all mounts. Should the Primary Ingest be compromised, the Secondary Ingest will serve the contributions to the Edge Servers.

Redundancy on the Edge Server Layer spreads the traffic footprint generated by connected audiences and mitigates the impact that maintenance or an outage could have on listeners. In the SharpStream Network, there are 6 Edges split across two sites and served by two different transit providers. 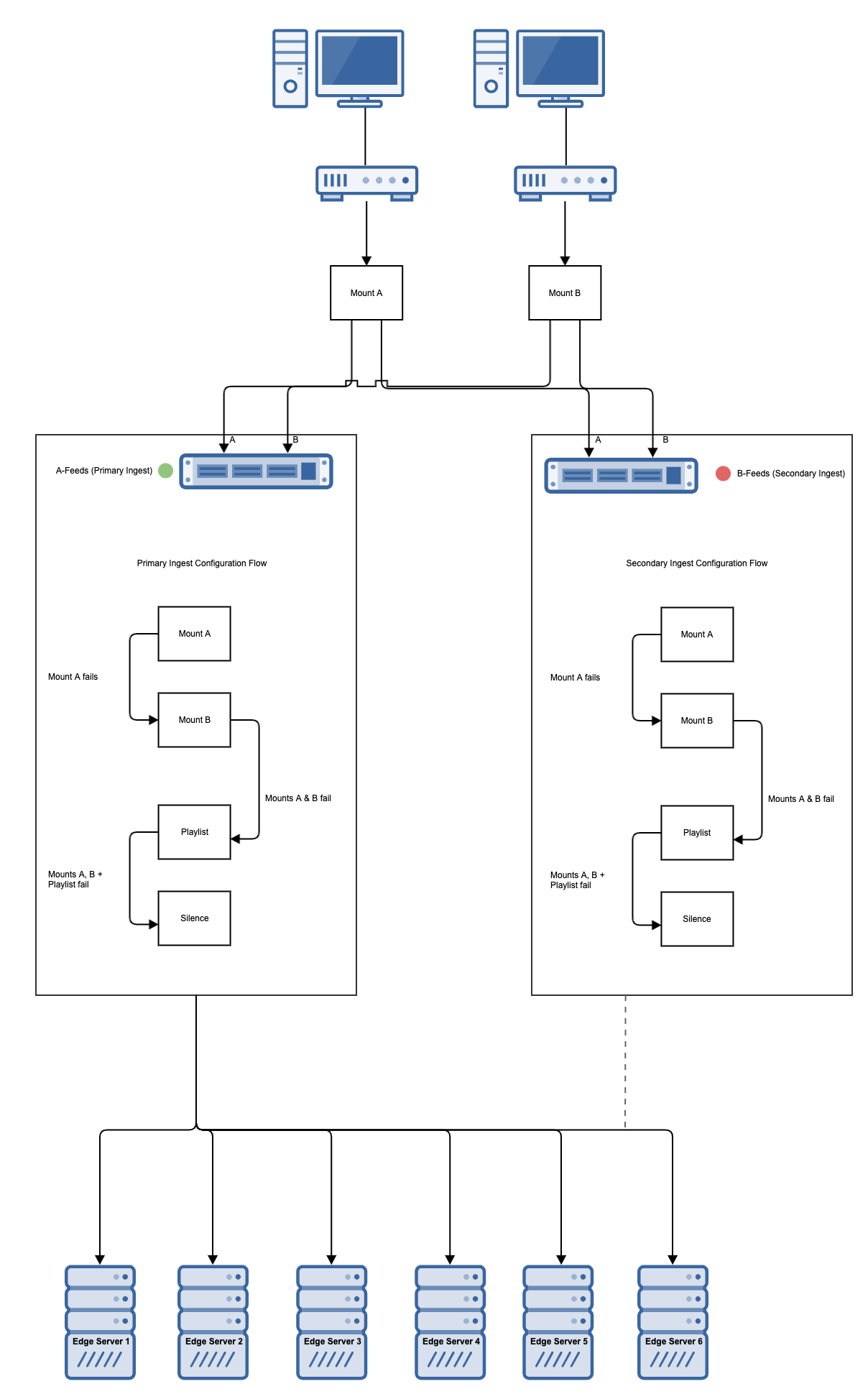 Let’s look at a few scenarios and what the expected impact will be on stream redundancy.

Station A have the full premium redundancy set up, and this includes: 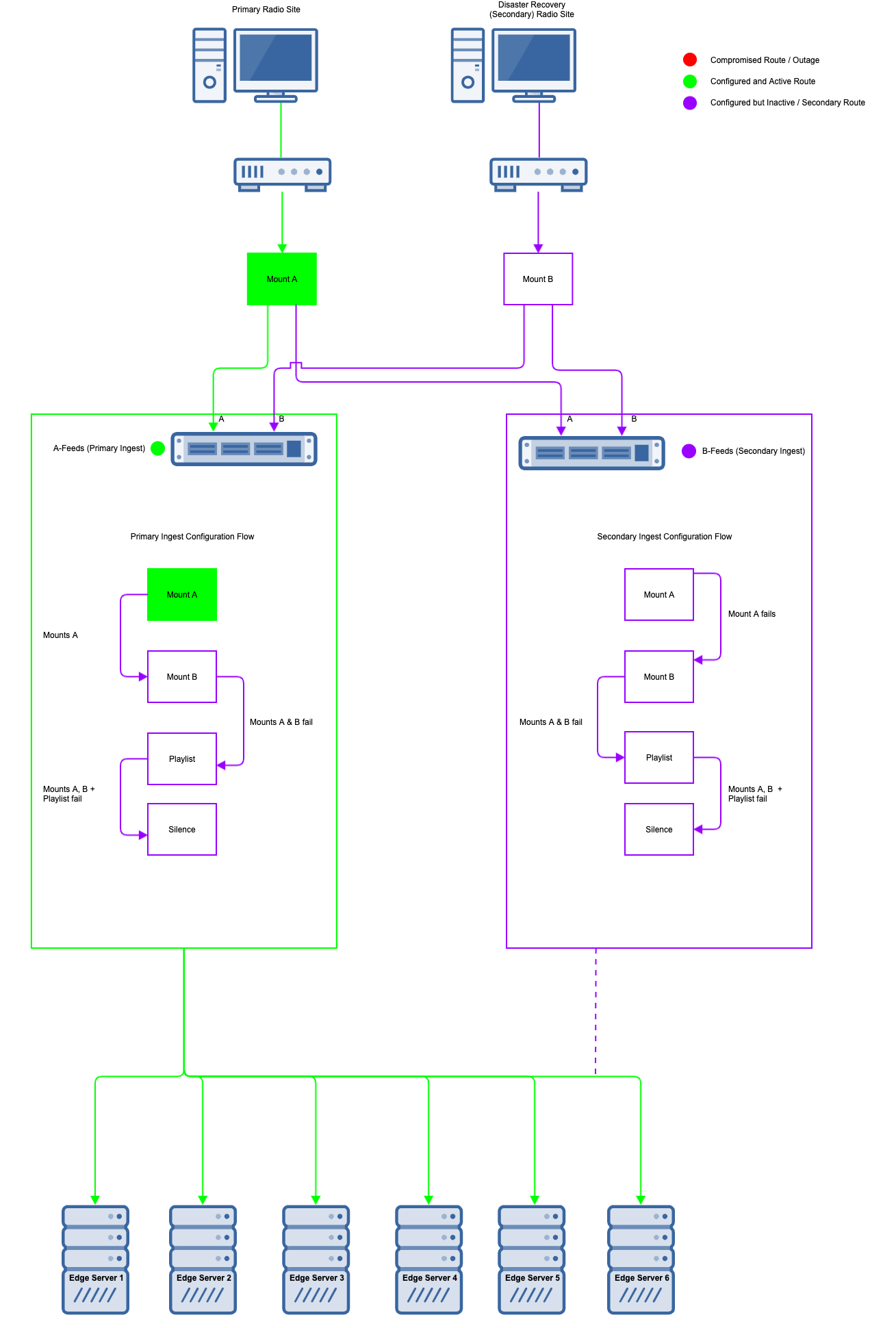 When the Customer suffers a power or internet outage, the primary site will be compromised and all ingesting will switch to the secondary (disaster recovery) site. The same impact will be seen if the Customer's encoder becomes disconnected for any other reason, such as a playout system failure. 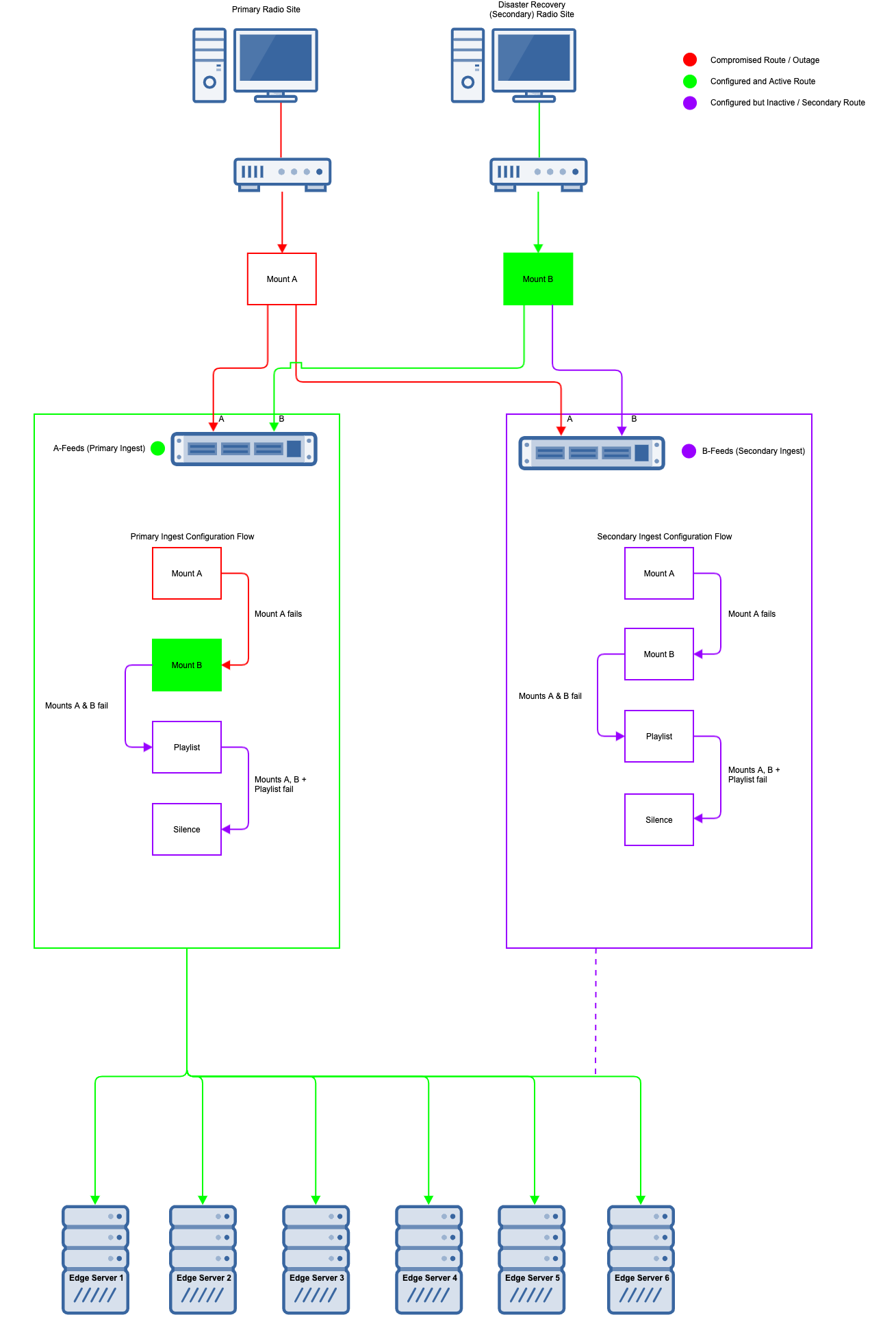 Should the Customer’s Secondary Site fail as well, for example, it suffers a power outage, internet outage, playout system failure or encoder failure, the audio source would change to Playlist and no audience disruption will be experienced. Should the Playlist fail, the final mitigation measure is the insertion of silence from the Configuration Layer.

As the Customer recovers from the outage, the audio source will revert back to the primary source, Mount A.

During an Ingest Server outage, the primary ingest with the configuration layer will be compromised and the secondary ingest will take over. 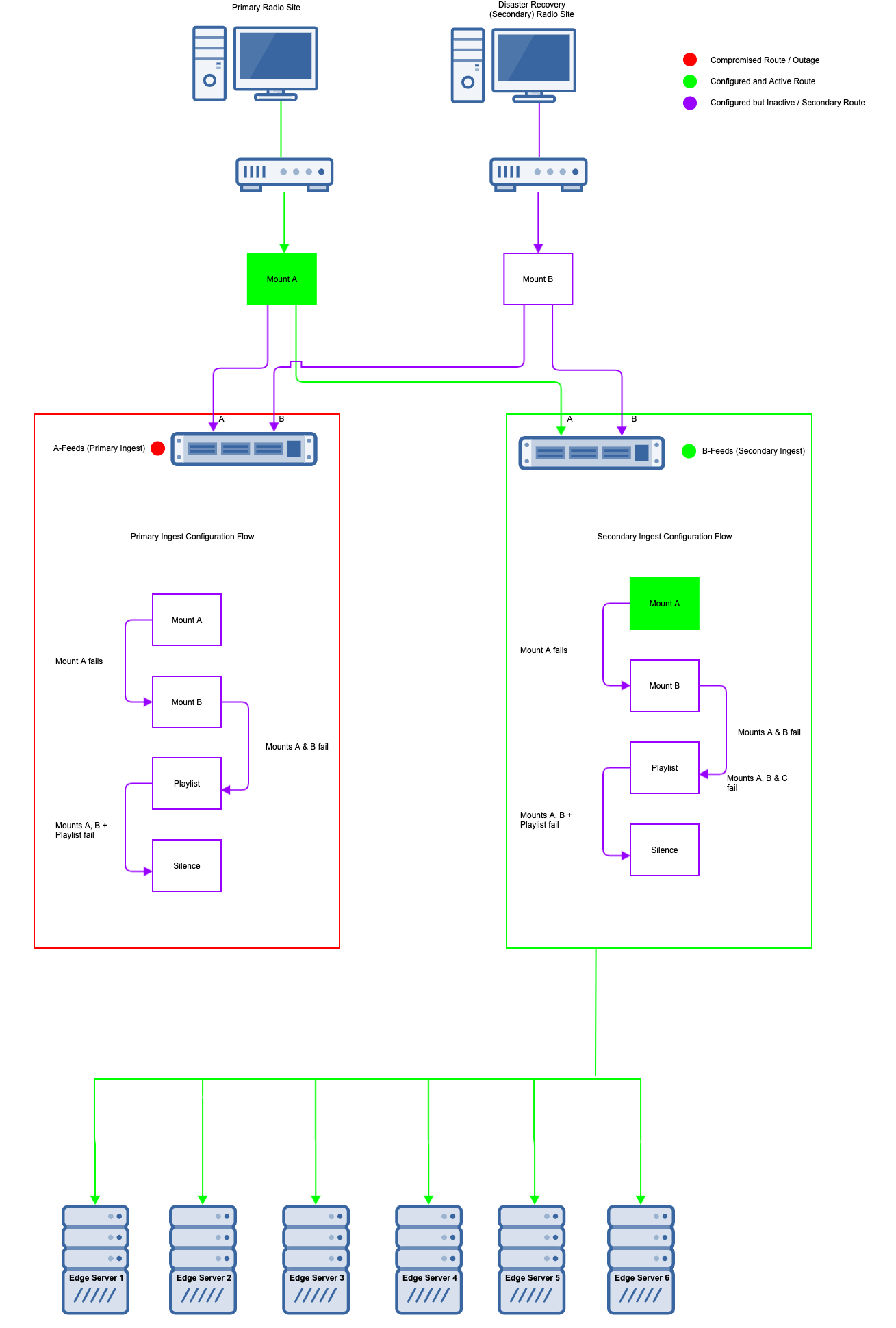 Once the Primary Ingest recovers, it will take over from the Secondary Ingest seamlessly and no audiences will be affected.

Did you find it helpful? Yes No

Send feedback
Sorry we couldn't be helpful. Help us improve this article with your feedback.